Bungee:"I am going to Conquer the fear of death."

- November 25, 2016
Bungee: "I conquered the fear of Death"
Sitting there 3 feet from the platform from where I was  about to jump 160 meters to meet my death or to complete my elation. I stared around looking at all the unfamiliar tools and weird equipments, harnesses, cables, wires, and bungee.  I noticed that the bungee is a few inch diameter of white rope.  My life is in that bungee rope I thought, The only thing to bring me back alive.
Meanwhile the three man crew was talking back and forth to each other.  One at my seat instructing and guiding me how to detach the ankle harness after the third rebound, the other managing the bungee and another the bungee master,I'm not quite sure what he was doing.
I decided to trust them.  I  had no choice .
Photographer came and took a short interview , I said "I am going to conquer the fear of death"
I smiled and looked over my friends and photographer.
I tried to look brave, though with fear and excitement inside of myself.
The crew member asked me to stand up from my seat.
I stood up.
My feet were bounded together so I walked like a penguin.  It's a 1 foot by 1 foot little metal square that extends from the suspension bridge.  There's a piece of coloured tape in  the bungee rope as an index for the weight range of jumpers. Wear and tear from hundreds and thousands have come through here and survived. I am suspended 160 meters above a suspension bridge between the huge gorge of BhoteKoshi.
I was standing at the platform and from its edge I was going to jump .
This was happening.
The crew member was holding harness at my back.  Neither pushing me nor pulling me back. But I knew he was there.
Friends wished luck and asked to look straight
I smiled and tried to look brave.
The bungee Master told me he was going to count down from three.
Heart was pumping incessantly.
I took a deep breath.
Never thought  to turn back. It was not an option.
I stood there taking it all in.  I looked down and got dizzy feeling .
This was happening.
This was happening.
This was happening.
I looked out to the distant hills and landslides scratches probably they were made by earthquake .
knees bent little , arms out.
And those Magical words from Bungee Master
3
2
1
Bungee
I jumped.
I lost connection with everything that is solid, secure, and familiar.
My body was freely falling in air and only thing to resist earth's gravity was air
I looked down.
The wind was ripping through my hair and my ear and an awesome and a thrilling feeling
All the anxiety, fear, nervousness, disappeared  in an instant.
I let go Myself and was completely inverted.  Head down, feet up and saw the Bhotekoshi's water below.  It was coming to me and it was coming FAST.
I was falling for few seconds.
Where's the bungee? I thought
Then I felt that the bungee started to pull at my feet.
It was a gentle pull at my legs and hips , the bungee slowed me as I was speeding towards the fast flowing Bhotekoshi.
The blood rushed to my head.
I came to a stationary state and then almost at once I was moving away from the ground.Blood still rushing to my head.
I got to the top and then I was falling again and remembered it was my first rebound by the bungee rope
I looked down and noticed the bridge from bottom.
I felt another pull on my legs and hips but not as strong as previous one and it was the second rebound.
At the top I was still upside down .
I looked down.  I looked up.  I looked all around and yelled out "WHOOOOOOO HOOOOOO! YAYYYYY!!"
and again Bhotekoshi was coming nearer at once I felt the third rebound.
yelled out loud, enough LOUD, all I saw from the end of that rope was bridge and friends waving hands
I searched for the strap attached to a lock at my foot as the crew member instructed me to release my feet so I could sit upright for the ride back to the platform.  It took a few quick jerks during the last rebound.
I did it I thought to myself while I was being suspended over 160 metre off the bridge .  And I remembered that it was only that particular rubber band bungee that was holding me up.  I remembered I was afraid previously when i was on the jump platform .  But somehow my fear was masked by that feeling of complete elation.
A little black circular thing was coming down along side my  bungee as I looked up.
I recounted what I've just done.
The little black circular thing with a lock in it came down to me. I hold the lock and locked it into my harness and stretched my arms as a signal to bungee crew and I was being pulled up.
What? It's over?
I got a huge smile on my face.
The ride up took few seconds.  I took it all in.
The blood rushed to my feet, I realized.
Crew member grabbed my bungee and pulled me back to that platform from where i jumped previously . I reached to the bridge with my feet.
I made contact with solid metal of suspension bridge
I was back and celebrated with my friends: Tilak Raj Kandel, Samir Neupane and Bishnu Bhusal :) :) :)

Popular posts from this blog 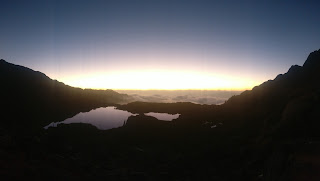